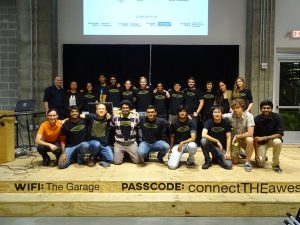 Our first ever concert happened on November 2nd, 2016 in the wonderful venue The Garage in Tech Square. The place was packed and we had a great evening, even our Dean Steven French attended the concert. The 7 pieces included the international female laptop orchestra OFFAL, the audience participation smartphone music Do The Buzzer Shake, pieces featuring the Women’s choir and Nothing but Treble, a MIDI fighter demonstration, and many more. Students from our department and our comissioned artist from OFFAL brilliantly demonstrated the use of technology (sometimes created in our labs) to enhance the music they performed, and most pieces were either performed or composed by female figures. One-minute lightning talks punctuated the concert to give an overview of the research conducted in our labs. At the end Nikhil Bhanu’s set mesmerized the participants during our reception.

This concert was an attempt to spread the word about the Music Technology department and what Music Technology means across campus, and it was a pleasure to see that the audience appreciated this tour of our world. You can find the full article here.

Nothing could have been done without the precious help of the School of Music, the College of Design, the Advance Program, the Women’s Resource Center, and Sandbox ATL -home of the Garage, so we warmly thank them. In addition, we greatly appreciate the support of the Center for the Arts and Institute Diversity. Most of all, thanks to all the artists and the volunteers that have spend so much time and energy making this concert a memorable event.

Pre-show at the Ferst Center 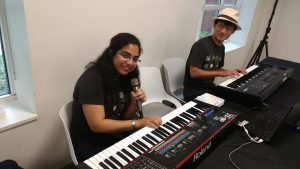 The Ferst center at Georgia Tech recieves internationally reknown artists for shows every weeks. This season, we had the chance to partner with the center and present and introduction show before the SF Jazz Collective performance. Hua Xiao (on the right in the picture) composed a pieces that intertwines different Asian musical styles and relied heavily on synthesisers to create unique sounds. Jyoti Narang (on the left in the picture) was singing, Lea Ikkache performing with a MIDI fighter, and Anna Weisling created responsive visuals for the audience.

We’re very thankful to the Center for the Arts who let us perform before SF Jazz Collective to Ashis Pati for organizing the event; and we are also particularly thankful to Women’s Resource Center and the Advance Program for supporting us. 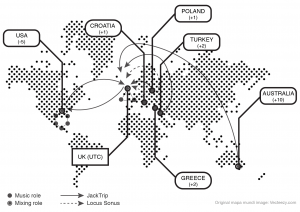 Figure 3: map of the performance, with connection between the musicians scattered around the globe. The audience is in London.

We had the chance to be introduced to FLO, an international Female Laptop Orchestra, and are preparing a piece together. The piece, Transmusicking I, will be executed by more than 15 musicians around the world, connected through the apps Locus Sonus and JackTrip, and will comprise traditional instruments, soundscapes, and modification of audio streams, with a final mixing and spatialization in London. The audience in London will also participate to the rhythm through the Open Band app on their smart phones.