An Interview with Elaine Chew 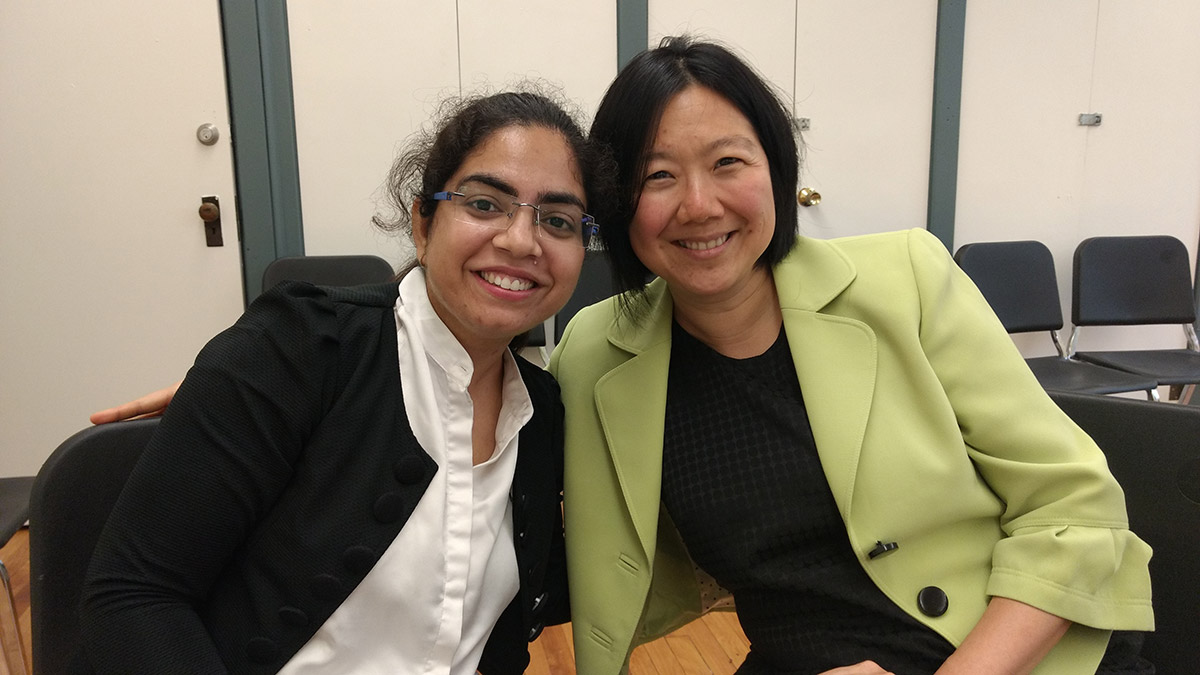 Photo (above): From right to left, Elaine Chew and Jyoti Narang. Photo by Anna Xambó at Georgia Tech.

A few words about Elaine:
Elaine Chew is Professor of Digital Media in the School of Electronic Engineering and Computer Science at Queen Mary University of London, where she is affiliated with the Centre for Digital Music. Her scientific research centers on the design of mathematical and computational tools to model, analyze, visualize, and manipulate music structures. She has had a highly productive career as a researcher and musician, and is author of the book, Mathematical and Computational Modeling of Tonality: Theory and Practice (Springer 2014). She received PhD and SM degrees in Operations Research at MIT, a BAS in Mathematical and Computational Sciences (honors) and in Music (distinction) at Stanford, and FTCL and LTCL diplomas in Piano Performance from Trinity College, London.

Why did you choose music tech as a field of study?
When I first started out, music tech was hardly a field. I was lucky that when I graduated with my PhD, it was just taking off–the first International Symposium on Music Information Retrieval (ISMIR) took place in Plymouth in 2000. Together with researchers in the field at that time, we started conferences and journals. I got into the field because I was doing the things I loved. As an Affiliated Artist of Music and Theater Arts, I was teaching Pianolab and directing the eclectic contemporary music concerts of the Aurelius Ensemble, but I was also in the PhD program in Operations Research (OR) at MIT. There, I met Jeanne Bamberger, who showed me some articles from the late 1960’s and early 1970’s on early work in music and artificial intelligence. I thought I could contribute with some of the techniques I was learning in OR and so I switched thesis topics to start working in that area. I figured out a way to mathematically model tonality that allowed for computational techniques to be designed for key finding, and that became my thesis.

How did you convince your institution to work in the music domain since you were originally from a different discipline?
There is a mechanism at MIT for any PhD student to propose an individually tailored interdisciplinary degree. This is what I did; and, for this I needed an interdisciplinary committee and a chair for that committee. The people around me were very open-minded and the faculty, enough of them at least, were willing to believe that there are deep connections between the fields and signed on to this committee. They were Jeanne, my PhD thesis supervisor, Georgia Perakis, my OR PhD advisor, and Evan Ziporyn from MIT, and Martin Brody from Wellesley College. I approached William Pounds, former dean of MIT’s Sloan School of Management, who was a keen supporter of the arts, to chair my PhD committee and he agreed. This turned out to be an incredible stroke of luck, as he would work magic in the room at meetings where I presented each stage of my thesis. The music half the committee would comment on the music part but found the mathematics incomprehensible; the OR members would say the mathematical/computational parts were correct but had no idea about music theory. Bill Pounds would calmly get the two sides to agree on what they needed in order to sign off on my thesis.

Tell me about your experience as a woman when you were a graduate student.
When I started at the MIT Operations Research Center (ORC) at MIT, I was only one of two female students admitted to the PhD program that year. There were maybe ten or twelve PhD students admitted in total. As a graduate student, I never gave it a second thought that I was one of only two female PhD students. It was only much later, when I started working professionally, that I became much more active and aware. Because I wanted to do things that were so out of the ordinary—I was the only student at the ORC who did a thesis in music; might still be the only one to have done so—it is hard to know if this contributed more to any difficulties I experienced or the fact that I am female. But maybe the two are not unrelated: perhaps being female, we tend to choose more nontraditional topics just so there is room to have a voice.

How was your experience of progressing in academia?
It was not easy because there was no established path and milestones for progressing in a field spanning arts/humanities and science/engineering. The first major challenge came in the form of landing a job in academia. I sent out many applications for assistant professorships, and received numerous invitations to interview. Inevitably, when I interviewed at engineering departments, people would assume that the mathematical music modeling work was just an interesting hobby. After a presentation, I would get questions like, “This is all fine and good, but what do you really want to do?” The implication was that I couldn’t possibly be serious about wanting to do that for a career. But I had just presented what I wanted to do. It was considered too high risk, and I would be told to establish myself somewhere else—let someone else take the risk—then re-apply in five years’ time when I am a proven quantity.

How did you get your first acceptance?
My first job offer came from Lehigh University, which was open to creating a 50%-50% joint appointment between industrial engineering and music. When the position did not materialize after a year, I re-entered the job market and started the interview circuit all over again. By then, I had done so many interviews and was tired of explaining myself to interviewers, so much so that when I was called in by Randolph Hall of the University of Southern California (USC) for an interview at the annual INFORMS meeting, I asked point blank, “Why do you think I will fit?” It turned out that USC had an Engineering Research Center (ERC) with 11 years of funding from the National Science Foundation. This Integrated Media Systems Center (IMSC), then headed by Max Nikias, had just had its mid-term review. The center needed a music expert that could fit in engineering, and the Industrial and Systems Engineering (ISE) Department lacked representation in this ERC. I could be the music-engineering faculty that linked ISE to IMSC, so this was the lucky break that allowed me to start my career.

What’s your favorite part of your job?
I love doing my research, and I appreciate it all the more having worked and fought hard for it. I feel very privileged to be able to do what it is I do. It is what I have always wanted to do and I expect to continue doing it for the foreseeable future. I get to design my own research and topics; music performance is integrated into my scientific research; and, I love working with my students! It is a very rewarding experience seeing students grow, establish themselves, and become researchers and leaders in academia and industry in their own right.

Would you share any of your success stories?
I have received fellowships and awards here and there, such as the Presidential Early Career Award in Science and Engineering (PECASE) and fellowships at the Radcliffe Institute for Advanced Study at Harvard. These have been immensely helpful, as highly competitive awards carry weight and serve as important external validation for risky and unusual work. However, when setting out to do something nontraditional and unproven, the greatest success may be to find the opportunity to do it at all.

What problems did you face while moving forward in academia? How did you resolve them?
Academic evaluation, tenure and promotion, proved to be challenging especially when the work crosses multiple disciplinary boundaries and mix seemingly contradictory practices from diverse fields. In my experience, progressing in academia has also meant establishing the yardsticks for the evaluation of the interdisciplinary work, in addition to doing the work itself. Being the recipient of a PECASE, the highest honor in science and engineering for early career researchers in the US, certainly helped smooth the way towards tenure and promotion.

Was there anyone who mentored you through this? How important is it to have a mentor?
I have had many mentors along the way, people in music, OR, and engineering, in academia and out: Jeanne Bamberger, Bill Pounds, Ronni Schwartz, and Marcus Thompson at MIT were important mentors and cheerleaders along the way; Georgia Perakis, who herself won a PECASE before me, was a key role model; at USC, Maged Dessouky, Max Nikias and Hannah Reisler provided guidance at pivotal moments; just to name a few. I could not have done what I have done and dealt with the challenges and stresses without the wisdom of the mentors around me. Men typically have more ready access to informal networks to support their careers. As a woman in a field with many more men, it is important to take the initiative to seek out trustworthy mentors to sound out ideas and gain valuable insight into new situations. 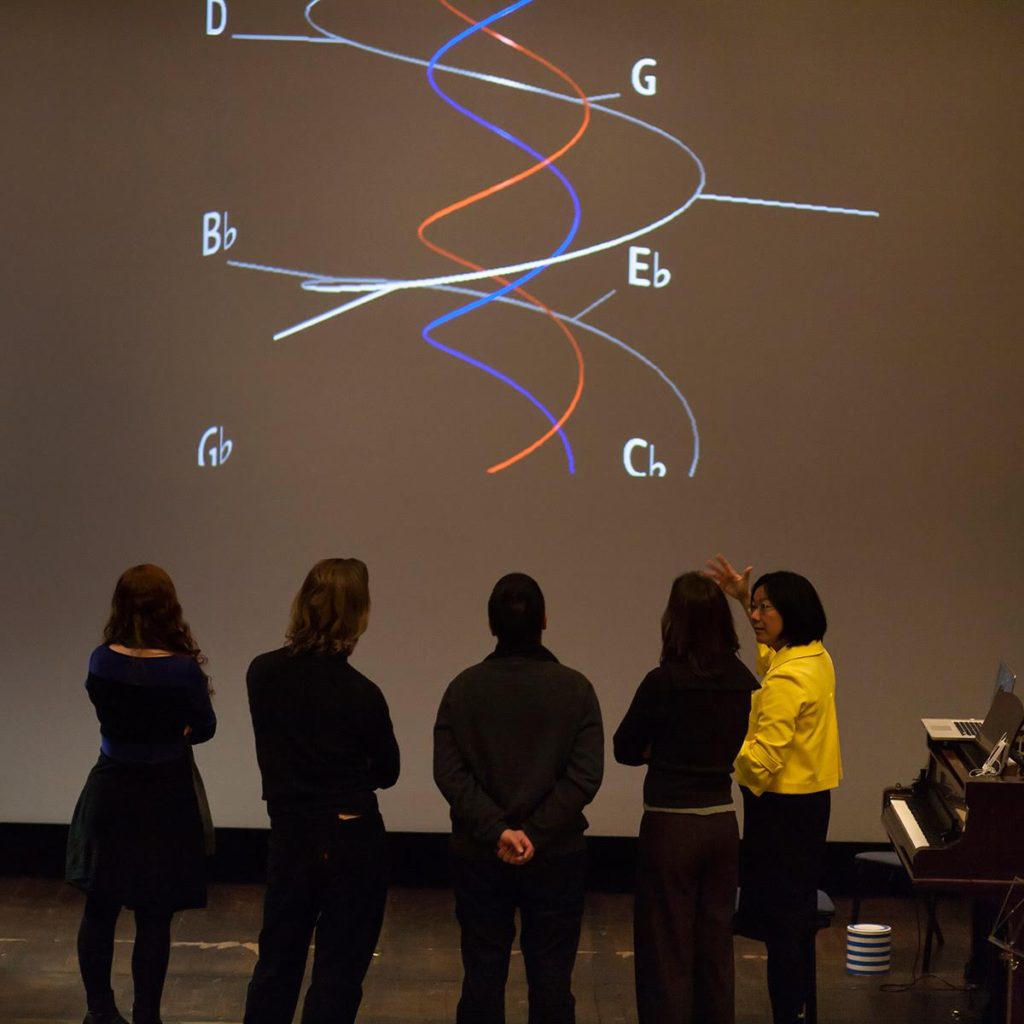 Women face many challenges in either the technology industry or academia but we also bring strengths. What do you think is the best part of being a woman in tech?
Women bring unique perspectives to an organisation–perspectives that can be lost when women form a small minority of the community–and having a diversity of viewpoints is a strength. As Bill Pounds once said to me when I despaired of finding a place where my work could fit, “How do you know that what you have to offer is not of value?” It is thus important for women to have the confidence to speak up and make our voices heard.

How do you think the problem of few women entering technology fields can be handled?
Many women feel intimidated by science, technology, engineering, and mathematics; the problem runs deep and needs to be addressed early in life. Young girls need to be encouraged and given opportunities to excel at mathematics and computing so that we can increase the pool of women qualified to enter technology fields. In music tech, we have the added challenge of also addressing access to music education. Role models and mentors are critical in navigating these challenges. A former PhD student, Ching-Hua Chuan, now Associate Professor of Computing at the University of North Florida, started the Women in Music Information Retrieval (WiMIR) group of ISMIR in 2012; a former postdoctoral fellow, Anja Volk, now Assistant Professor in Information and Computing Sciences at the University of Utrecht, is a key founder of the WiMIR mentorship program, a wonderful program started in 2016 that matches up mentors and mentees in the field, with strong support from both women and men.